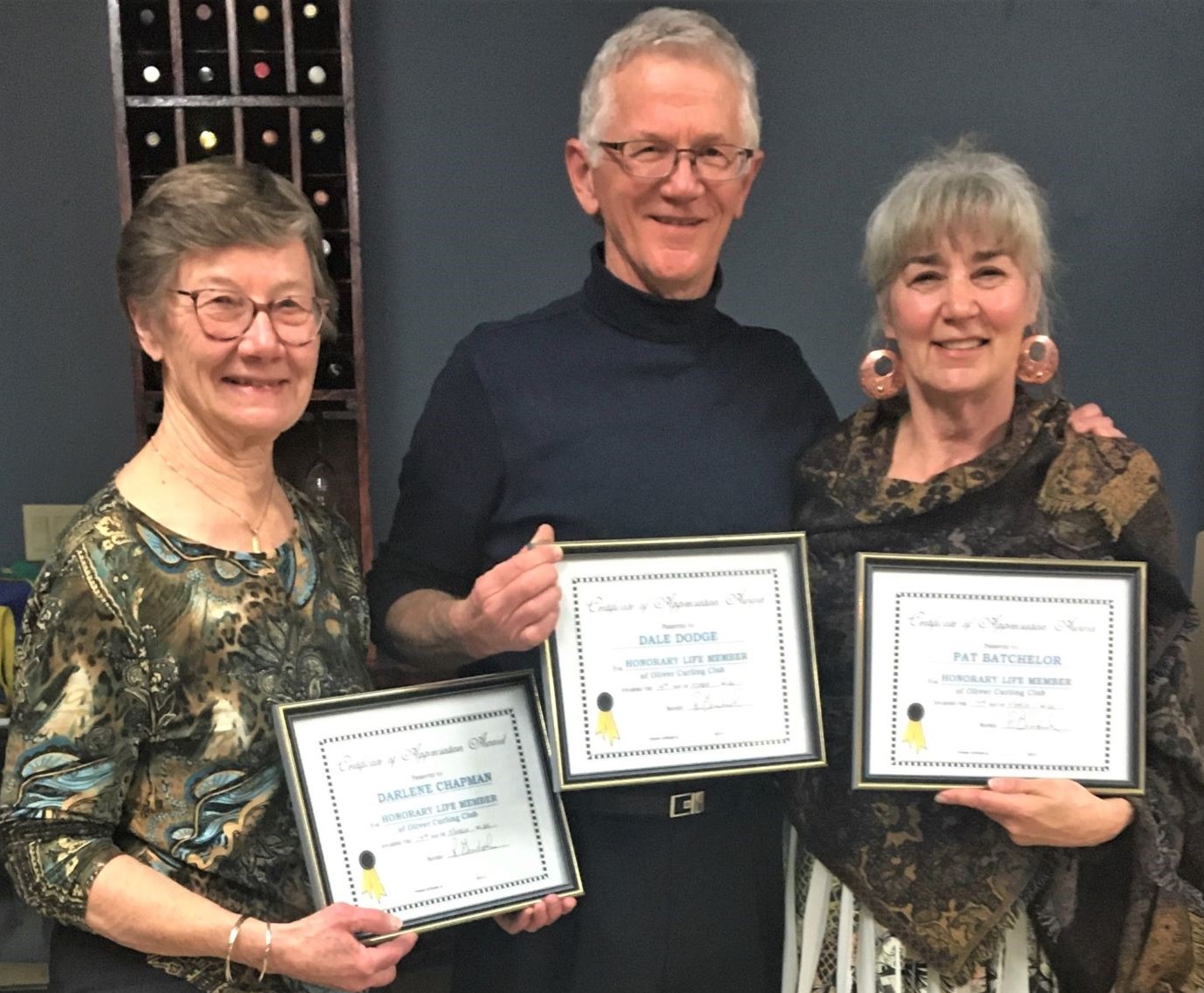 Three new Honorary Life Members were announced at the 2020 Windup Dinner: Darlene Chapman, Pat Batchelor and Dale Dodge. Inclusion in this special group of club members recognizes their years of selfless contributions, dedication and a lot of hard work to keep our club running so successfully.

Darlene Chapman is a charter member of the Oliver Curling Club and cornerstone of our volunteer force since the 1970s. She definitely qualifies as an unsung hero: she has not sought the limelight but has simply done “all the little things” for so long. And these “little things” have added up to a really massive contribution! She can always be relied on to help with her characteristically cheerful, “Okay, let’s roll up our sleeves and get it done” attitude. No matter what you asked for, or needed, she would do it. From organizing to cooking, cleaning, secretarial and board duties, contributing sound advice and common sense…. Darlene has done it all – over and over for all these decades. It is easy to forget the selfless work in the trenches that keeps the club moving. She was there. Few indeed are the bonspiels, functions and parties that haven’t carried her mark. She also remains a keen curler, locally and regional, and an exceptional and gracious ambassador for the game. It’s especially fitting in the club’s 50th anniversary year that we honor someone who has worked from day one and helped develop the club and its culture into what it is today.

Pat Batchelor served on our board then became president in 2010 for two terms. She stepped up at a very difficult time when the club was experiencing a financial crisis and facing closure if it couldn’t pay the electrical bills. She and her husband, Bill Ford, personally monitored electrical readings daily for months. Through a lot of initiative, tenacity, and attention to detail, Pat was able to show the power company the club had been overcharged. She also investigated lighting problems and got a grant for high efficiency lighting to further reduce costs. Pat was lead organizer of many extra fundraising events like Grey Cup and Super Bowl parties and an Elvis Night(!) to raise money to keep the club afloat. Working with a committee of Murray Soder, Dale Dodge and Dave Mattes, the club's "resurrection and rebirth" began with the implementation of a business plan and sponsorship program. New leagues formed, curlers increased and finances grew. Pat then initiated a capital reserves plan to help keep the club’s future secure. Pat has also served the club as bar manager (again), league rep, high school curling team coach/sponsor, and long-time curler in multiple leagues as well as bonspiels here and out of town. Pat is a tireless worker who at the same time is truly appreciative and supportive of other people’s efforts.

Dale Dodge has been active in every facet of our club: president, board member, enthusiastic curler at the club and regional level, and awesome ambassador for curling, modeling good sportsmanship and recruiting new curlers. Dale’s outstanding contribution stemmed from the financial crisis of 2009-2011. Dale spearheaded the creation of a business plan that became the survival strategy for the club. It involved promotion and marketing of our club and sport, which remains one of the mainstays of our financial structure today. Much of what we see around us at the rink today – from the corporate sponsorship program to the Eastlink name on our building – is a direct result of the work that Dale was involved in 10 years ago. Dale was integral in starting the Corporate League, which he ran and played in. Its success continues to provide revenue and bring in new curlers who also join our other leagues. Others helped implement these changes, but Dale drove the changes, with meetings, emails, schmoozing…. “You can have a plan, but you gotta have the man!” And Dale was the man.